iPhone 4 features the medical community can be excited about: Retinal Display and enhanced PDF viewing

As most of you know, the iPhone 4 was just announced by Steve Jobs today.  The iPhone 4G brings significant upgrades from the 3GS – video conferencing, multi-tasking, HD video recording, and more.  The overall look of the phone is different as well, it’s being proclaimed as the “thinnest smart phone ever” by Steve Jobs.

In the mountain of new features announced today, there are two that should stand out for the medical community.  Retinal Display and PDF viewing.  As more details emerge, this post will get updated accordingly.

Apple now has the sharpest and highest resolution smart phone – they are calling it “Retinal Display”.  While the screen size is still 3.5 inches (diagonal), the pixel resolution is now 960 by 640, 326 pixels per inch.  For comparison sake, the 3GS had a resolution of 480 by 320, 163 pixels per inch.  Obviously, the iPhone 4’s display is a tremendous leap forward.

How this effects the medical community:

This new resolution is huge for radiology viewing apps.  We’ve highlighted the huge interest in these capabilities in the past, and the DICOM viewer, OsiriX, has already been used in a study to accurately diagnose appendicitis.  I’ve already been in contact with a radiologist who is extremely excited about this new display, and can’t wait to see developers make use of it.

The enhanced display bodes well for other health care professionals as well.  Everyone has had a patient who has taken a picture of an abnormal skin lesion or another pathology and the picture is blurry, or demarcations are hard to distinguish because of the phone’s resolution.  The iPhone 4’s display will make viewing these images more comfortable and accurate.  There are plenty of applications where an enhanced display will be key as well, such as the free radiology learning app, iRadiology.  Anatomy teaching apps should get a boost from the new display as well.

The ability to view PDFs on the iPhone is not new, but its cumbersome when reading them on the iPhone.  Obviously, the ability to read medical literature, in the form of PDF files is key, so developers have made apps that provide a solution.   iAnnotate and Papers are two of these solutions available for the iPhone and iPad.  iAnnotate gives you a wide array of annotating tools, while Papers is an app that helps you organize and store your collection of PDFs with ease.

However, it looks like the Apple iOS4 (renamed from iPhone OS) will allow you to view your PDF files in the iBooks app.  On initial screen shots, it appears you’ll be able to edit and highlight PDF files.  iBooks will sync across your iPhone and iPad – allowing you to keep your PDF files organized.  This new capability is more of an operating system upgrade, rather than a feature just for the iPhone 4 – and we’re definitely excited to see how our literature will look in iBooks. 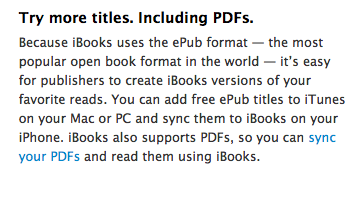 As we find out more we’ll be updating and editing this page.

One of our physician friends (statcoder) who is live at WWDC had the following comments sent to us. He is also happy to answer questions via the comments section below, so feel free to ask away.

“The WWDC keynote just wrapped up a few minutes ago with Steve Jobs presenting the new iPhone 4, Apple’s answer to the competition which has clearly ramped up.

Of interest to medical users will be a doubling of the pixel density from previous models. The new resolution exceeds the ability of the human retina to detect detail at normal viewing distances. There is also new multitasking in iOS4 (the new name for iPhone OS).

The main consumer push will be a front-facing camera for video chat via wifi. The user can switch from the front to the back camera so this would also be appropriate to show what one is actually looking at. One could imagine some applications for consultations. Apple is going to make the video conferencing platform open in the hopes of facilitating widespread adoption. It’s all about the iPhone this week at WWDC.”