Acne “treatment” apps could be taking advantage of patients

Getting a new medication or medical device approved in the United States requires embarking on path so nightmarish it makes Dante’s Inferno look like the yellow brick road. And while most clinicians and bureaucrats would agree that we need to find a better way, its not hard to imagine how we ended up with such a complex regulatory structure. Going back over 2,000 years to the Hippocratic Oath, the practice of medicine has rested largely on two principles – beneficence and non-maleficence. The latter refers to the idea that we, as clinicians, first do no harm while the former requires that we act foremost in the best interest of the patient. In attempting to uphold these principles, we have created an enormous regulatory structure intended to act as a sieve allowing only those interventions of proven benefit to reach the general public.

I don’t claim its anywhere close to a perfect system. And as there are enormous amounts of money at stake, often involving a very vulnerable group of people, its our responsibility to stay vigilant against those who attempt to manipulate the system as well as treatments that are of questionable value. And there are a small group of app developers whose apps may fall into the latter category with claims to treat acne with light – well, that is unless a patient is willing to hold their iPhone to their face for the next 100 years.

Acne is an incredibly common condition which can significantly degrade quality of life. Up to 10% of Americans experience forms severe enough to leave permanent physical and psychological scars. While many therapies exist, escalation of therapy often involves significant risk. One emerging therapy is in phototherapy – basically using specific wavelengths of light to treat the skin. With a minimal side effect profile, results are promising. A recent review in the British Journal of Dermatology describes a number of small trials that show lesion reduction after treatment with phototherapy. For example, one trial found a blue-red light combination treatment to be more effective than a common topical treatment. Another found no difference between blue light treatment and a topical antibiotic. Its important to note that these trials were small and often poorly controlled, so the best conclusion that can be drawn is that these therapies are promising and warrant further study.

However, at least two app developers have decided to go ahead and bring this therapy to market – FunVid Apps with Acne Light Waves and Archibald Industries with Acne Away Premium. For $2 or $5, respectively, they claim that acne sufferers can watch their acne disappear in as little as 3 days simply by holding their iPhones to the affected area for as little as 1 minute twice a day. Wow! 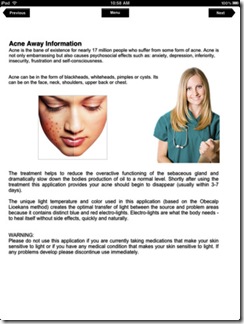 When I first saw these apps, I was skeptical but decided to give them the benefit of the doubt. Surely, they would back up these claims with some evidence suggesting it works. Unfortunately, the website links on iTunes just go to the developer pages where the apps are not even mentioned. No luck here.

Then I thought maybe the developers had almost stumbled onto a low-cost, effective treatment for acne and further study would vindicate these apps. So I decided to compare the phototherapy these apps provided with that provided in one of the clinical trials. Unfortunately, the dosing of light in these trials is measured in irradiance (J/m2) and the only description of light output I could find for the iPhone was in illuminance (llux/umens) – the key difference between the two is that illuminance is more a measure of what our eyes perceive while irradiance is more a measure of the energy carried by the light. So at best, there is currently no way to show that the iPhone is even capable of delivering the doses of light that have been shown to have some effect in our small trials. At worst, based on my calculations, it would take over 100 years to achieve the same dosage of energy used in a single treatment in one trial of blue light phototherapy (see below for details on calculations). 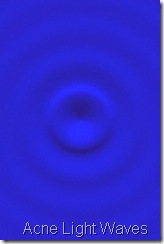 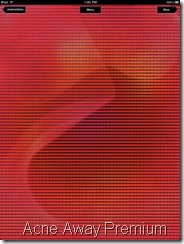 So where does that leave us? Phototherapy is an unproven but promising medical therapies aimed at managing a condition with potentially severe physical and psychological consequences. I suspect these apps are likely cheap knockoffs of potentially beneficially therapy while providing no supporting evidence of their own.

Knowing that some medical therapies of acne make skin photosensitive, these apps are potentially harmful to patients who use them without a physicians knowledge. In addition, they more than likely provide no benefit to a patient suffering from acne. While these developers do not claim to be medical professionals, they do claim to treat a medical condition and should be held to the same Hippocratic standards that we hold all others in the medical field.

As such, I hope that one of two things would happen here. My preference would be that someone, preferably the developers, prove me wrong – give me some reason to believe that a reasonable argument could be made that these apps are effective. I promise I’d happily recant everything I’ve said. Otherwise, I hope someone – the developers themselves or Apple – pull these apps out of the app store, thereby preventing vulnerable patients on wasting their money on what is likely just a glorified mood light.

Appendix: What follows is the result of my attempt to convert the 207 lux output of the iPhone into an estimate of its irradiance. I include it only in the hopes that someone with a stronger physics background will either confirm or correct my calculations. At 207 lux and a screen area of 0.00425 m2, the illuminance of the iPhone screen is 0.87975 lumens. Using the phototopic luminosity function value of 0.1 at a wavelength of 420 nm, which is used in at least one trial of blue light, the conversion factor for a narrow band light would be 6830 lm/(W/m2). The irradiance would therefore be 0.00012881 W/m2 or 0.000000012881 W/cm2. So to reach the 40 J/cm2 per treatment that was used in the above referenced trial, it would take 126 years.