If you dream of pulling out your shiny iPad from your white coat to look up medical information via an app, similar to what you do on your iPhone, you might think: surely, my iPhone medical apps must look better on my iPad.  You should know the following before entertaining those thoughts.

In our recent hands on review of the iPad, we were definitely excited with the iPad’s potential, especially for the medical community.  With that said, there have been two huge disappointments with the device.

One – from a visual perspective, the iPhone medical app user experience does not translate well to the iPad.  Two – there are just a handful of legitimate medical apps for the iPad right now.

iPhone medical apps within the iPad

When Apple announced all existing apps running on the iPhone Operating System would function smoothly on the iPad, many of us in the healthcare field assumed the user experience of these apps would be replicated on the iPad – possibly even enhanced by the significantly larger screen.  This didn’t come to fruition, and here’s why.

If you look at the below screen shots, you’ll see an example of how Epocrates and the Blausen human atlas will currently look when you load them on your iPad. 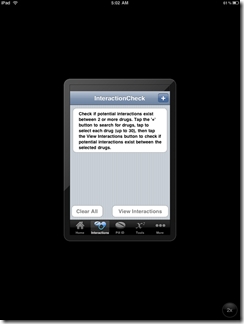 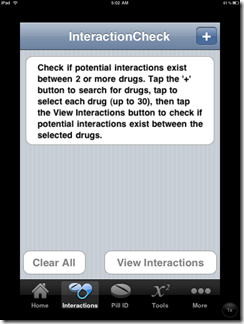 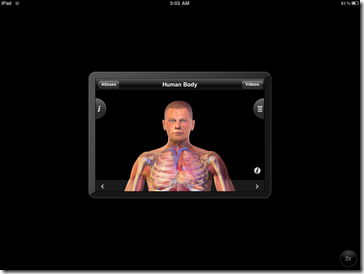 Notice how they take up the same amount of real estate on your iPad as the size of your iPhone.  There is an option to take up the full screen of the iPad, by tapping the “2x” button in the bottom right corner (notice larger epocrates look), but this just doubles the pixels, and causing a blurring and pixilation effect.  The iPhone is set to a resolution of 480 by 320, while the iPad is set to 1024 by 768, which is why this effect is so pronounced.

Marc-Emile Plourde, one of the creators of the popular iPhone medical app, Md on Call, says developers can approach customizing their apps to the iPad in three methods:  Don’t do anything about it (not a good option), create a completely new app designed for the iPad, or update an existing app so it runs on both the iPad and iPhone platforms.

The advantage of the third option is users who’ve already bought the app for their iPhone won’t have to pay for it again on their iPad.  Marc-Emile says many developers are opting to go with the second option, creating a new app that has the same features, in an effort to increase revenues.  Marc-Emile decided to go with the third option.  MD on Call, below, has already been customized for the iPad, and is free of charge for those who have purchased it on the iPhone already. 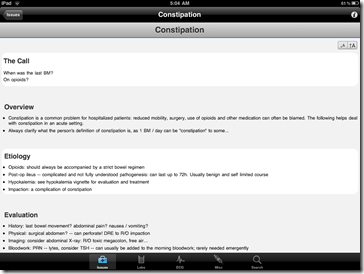 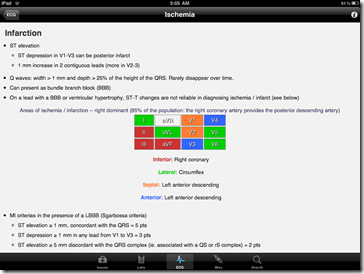 Lack of medical apps customized for the iPad:

Another iPhone medical app that has been updated with this third option is the popular app, Medical Spanish.  Ameir Al-Zoubi, the developer of this app, says timing and access are key reasons why we do not see more medical apps customized for the iPad.  Developers have had access to the iPad SDK (software development kit) and the iPad simulator since January 27th, but very few developers have had access to the actual device until its release. [screen shots of the Medical Spanish app, customized for the iPad:] 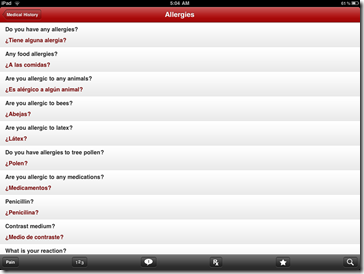 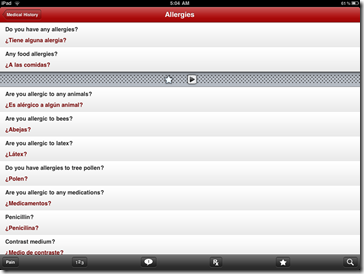 Ameir says many developers have been hesitant to release iPad customized updates of their apps until they have been able to test out their app on the actual device itself.  This is a sentiment shared by Marc-Emile and other developers I’ve contacted as well.

The below chart from Distimo shows how the medical apps category is only ahead of the Finance, Navigation, and Weather categories when it comes to iPad applications.  More notable, however, is the explosion of games for the iPad.  This isn’t a huge surprise since the games category has always been the most popular and usually yields the highest revenues for developers.

What we can expect in the future and what this means for now:

Currently, Epocrates, Blausen Human Atlas, and many more iPhone medical apps are in the process of updating their apps so they take advantage of the iPad – We’ve been told by these developers that the iPad customized version of their apps should take anywhere from a week to a month.

Time appears to be the biggest factor in this transition.  Many developers feel it’s better to wait and make sure their app runs flawlessly on the iPad, verse rushing out an iPad customized version filled with bugs and other errors.  Until then, we’re hoping the top 5 iPhone apps we want to see customized for the iPad get updated soon (the Papers app has been converted already).

If you want to use your iPad in clinic as a reference tool, for medical education, or for patient education, you might want to hold off on your purchase for now.  At the end of the day, the App Store is what makes the iPad stand out, and it’ll take time for apps, especially medical ones, to catch up to the hardware.