The medical textbook has long been a ripe target for digital enhancement. In the 1990s the paragon of digital publishing was the CD ROM. At that time, publishers produced premium versions of their leading texts which included a CD ROM with additional images, search capability and even videos.

With the advent of powerful mobile devices, a new shift in electronic publishing is underway. These devices have the ability to easily display imbedded graphics and videos and maintain a full-time internet connection. Thus, there is now the opportunity for a complete re-imagining of the concept of a textbook. Some ideas were explored on this site in a post titled “Social Textbooks and the iPad – How the Medical Community Could Benefit from Dynamic E-books”.

Any good idea, of course, occurs simultaneously and in many forms. In fact, this year’s annual Consumer Electronics Show (CES) was apparently rife with multiple vendors’ versions of electronic book readers. For example, while the Amazon Kindle clearly has an early lead among e-book readers, new electronic ink technologies stand to rapidly overcome the Kindle’s two biggest failings – the inability to display color and the sluggish response of its display. Qualcomm (yes, the cell phone chip company) is bringing out a very interesting color e-reader based on a novel oil-based display technology that can go weeks without recharging, as seen in Alex Pham’s LA Times blog.

According to ZD Net, however, possibly the “most exciting announcement at CES” might be the Blio Reader. In contrast to the many devices demonstrated, Blio Reader is purely software. The site claims Blio will run on Windows, Mac, Linux, iPhone & Android, although it is not clear whether it will be native to Mac and Linux or simply run inside Microsoft SIlverlight (a Flash analog). 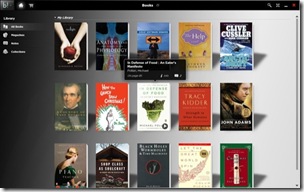 Blio reader accepts as input a PDF or ePub version of a text and allows the addition of interactive multi-media elements, including video, quizzes and live internet content. It adds an attractive simulation of a page being turned (reminiscent of the iPad iBook application) while allowing annotations and note taking. An interview with its creator and demonstration of the Blio reader is available at CNET.

That medical textbooks would benefit from additional interactive features was obviously anticipated by the developers of Blio Reader. This is evident on their home page where an anatomy text is prominently displayed. In a keynote presentation at CES that included Steve Ballmer, CEO of Microsoft, an automated anatomy quiz using Blio Reader was demonstrated to the CES audience.

The Blio Reader also has an interesting provenance, being developed by Ray Kurzweil, the famous technologist and futurist.  Kurzweil is a gifted inventor who has started multiple companies and whose contributions span optical character and speech recognition technologies. He has long had an interest in education as well as assistive technologies.

In fact  K-NFB, the company producing Blio, is a joint venture between Kurzweil Technologies and the National Federation of the Blind. Not surprisingly, the Blio Reader will have included a built in text-speech synthesizer to read books. It will also allow synchronization of a professionally recorded audiobook with the text, highlighting the word or phrase being spoken. This could  potentially be a great teaching tool for beginning readers.

Blio Reader software will be offered for free and was supposed to be available in early 2010, although it seems the date has slipped some. The company has partnered with Baker & Taylor, a large book distributor as well as several publishers and claims will launch with 1.2 million books in their e-bookstore, a number that exceeds any other electronic book store, with 1 million predicted to be free. Given the combination of widespread distribution, free content and software, we can imagine rapid adoption. If this is the case, a new era of medical textbooks may be around the corner.