One of the pleasures of a large meeting like HIMSS is the chance to meet remarkable people who are creative and productive but with whom one would not otherwise cross paths. Dr. Yan Chow is a physician who’s career has spanned several spheres. He holds an advanced software engineering with three patents for network storage architecture and has launched a few Bay Area tech startups. Later, he decided to pursue an MBA and entered the Univ. California Berkeley School of Business as the “second oldest guy in the class” and, he says with a twinkle, graduated as valedictorian.

He continues to practice as a pediatrician at Northern California Kaiser but is also the director of the Kaiser Permanente Information Technology’s Innovation & Advanced Technology Group. This is a remarkable position that only a health care institution as large as Kaiser can create. In essence, his job is to survey the newest technologies and decide which ones could be implemented in the larger Kaiser health system. It is, undoubtedly, the dream job for any health care technology aficionado. But for the institution, it is a strategic asset that helps it to avoid costly purchasing mistakes. Kaiser also maintains the Sidney Garfield “Laboratory for Innovation,”a 35,000 Sq ft space with fully mocked up patient and operating rooms where real doctors and nurses trial new technologies. Dr. Chow told me a remarkable story of just how valuable these investments can be.

Some time ago, a rolling battery-powered computerized nurse medication cart was introduced. The idea was to allow nurses to dispense medications and perform their charting at the bedside. It seemed like a great idea and the Innovation Center acquired a few and set out to test it. As Dr. Chow tells it, within a few minutes, they determined it was not workable and they recommended against purchasing it. Some time later, a group of health executives was touring the center when the story of the rolling medication carts was told. Suddenly, one of executives “turns white” and, just when they thought he was feeling ill, he divulged why. Apparently, his hospital had seen the product and quickly spent a huge bundle acquiring 3,000 of them. They now sit in a closet and nobody uses them. So, it turns out, that like everything else in medicine, what works well in the laboratory does not always work well in practice. 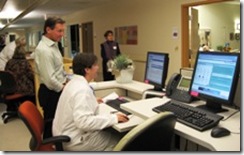 Dr. Chow’s primary focus, however, is in looking even further ahead. His group is tasked with “…identifying and assessing new and emerging technology that may be adopted by Kaiser in the delivery of care three to five years from now.” He thinks of it like a “think-tank” where cutting-edge technologies are evaluated. Some of the ideas they are looking at include tele-medicine, mobile health, location tracking, virtual reality, genomics and robots. And, while the group has been asset for Kaiser, it has also been a boon for vendors who now have a single point of contact when they want their product to be evaluated.

Part of the advantage Dr. Chow has is that the Kaiser economic model favors distributing patient care responsibilities across multiple levels of care givers. In other words, since Kaiser practitioners are not constrained by the fee-for-service model, patients and mid-level providers can be far more integrated into the health delivery than in other outpatient settings. Thus, they are able to deploy communication platforms where patients and nurses are more involved in patient care – doctors only get involved when their expertise is truly needed. In a typical office, if you communicated with your patients by email and phone only, you would quickly go out of business.

Since its early days, Kaiser has always seen itself as driven by evidence-based medicine. The founder of the original physician group, Dr. Sidney Garfield, informed his physicians that the future of medicine lies in computers and that they better adapt to it – back in the 1970’s! It seems that this same forward-looking attitude continues to live on in the Kaiser Innovation and Advanced Technology groups.