The UK’s National Health Service Takes its War on Smoking to a New Front: The iPhone

Smoking is an addiction – that’s something we all know. But the chemical addiction, i.e. the biochemical dependence that develops in a person’s brain, has been curable for quite some time. Drugs like Bupropion, Chantix, and the various forms of nicotine replacement are all pretty effective at tying a person over as their body withdraws from the nicotine they had been filling their lungs with for years or decades. What has been the bane of patients and healthcare providers alike is not really the “addiction,” its the associated behavior.

To be clear, I’m not saying that smokers are facing an easy task, but quite the opposite. Behaviors are patterns of learned behavior that become engrained in our brains, generally reinforced by stimuli such as the positive stimuli associated with smoking like taking a break from work, being at a bar with friends, or even getting the relaxed feeling nicotine generates. So the patient attempting to quit smoking is driven back to it by these stimuli – being at a bar, taking a “smoke break” with colleagues. All of this combines to reinforce smoking as a learned behavior and breaking that is the hardest part – that’s why so many smokers go clean frequently only to relapse months or even years later. So what does the iPhone have to do with this?

The National Health Service in the UK is taking an innovative approach to providing more active support to patients attempting to quit smoking through a new iPhone app, what they are calling the “Quit Smoking App” (really went to town on the name!). This app does a number of things. It tracks for the patient how long they have been smoke free and how much money they have saved in doing so, which can be a great form of positive stimuli for the new smoke-free behaviors they are trying to learn. It also provides daily feedback/tips to encourage active management of the problem by the patient.

In addition, it provides one-touch access to the NHS Stop Smoking hotline for support whenever the patient needs it. All in all, this app provides constant support network and encourages active patient management – both key features to a successful effort by any patient to break an addictive behavior pattern. Built into the National Health Service’s electronic health record, this could be an incredibly powerful tool. 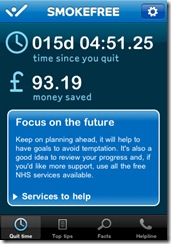 Another similar campaign involves a Facebook widget where friends, partners, and others can help encourage the patient in his or her efforts. It even lets you “throw a sheep” at the patient when they light up again (the British have a weird sense of humor). What would be even more interesting is to tie this to the iPhone app, allowing the app to not only deliver the NHS support network but also bringing to bear the patient’s own social support network. So in addition to daily tips from the National Health Service, the patient could see words of encouragement from friends too. And perhaps the occasional sheep when they stray. All in all, its a pretty innovative approach to a problem that is costing us far to many lives each year.