Michelle Obama’s Fight Against Childhood Obesity Comes to the iPhone and Android – with $40,000 At Stake

The First Lady yesterday announced an innovative new component to her Lets Move! campaign against childhood obesity yesterday – a call to developers to produce healthcare apps for the iPhone/Android/etc that encourage children to make healthy food choices and exercise more. Its an interesting and forward-looking approach to a major problem. While popular attention is focused often on adult obesity (e.g. the classic hip-level video of larger Americans walking), childhood obesity is not only a problem now but a big danger for the future. The fact that type II diabetes management is now a pediatric problem should be enough of a cry for help and this is definitely an interesting part of the answer – but at least one major challenge has to be addressed for success.

The program basically works like this – developers submit apps that either encourage healthy eating or exercise. A number of USDA datasets have been made available such as food groups for a 1,000 items, calorie counts, and so on that should be used in either the development of a “tool” or a “game” that promotes healthy behaviors. The apps are intended to benefit pre-teens but can be geared to kids or parents. Beyond those stipulations, pretty much anything goes. Oh and by the way, the winners – as judged by a panel including Apple co-founder Steve Wozniak and US CTO Aneesh Chopra – will get a total of $40k from the USDA. 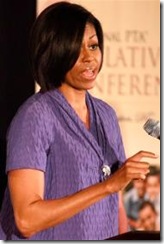 The First Lady isn’t the only person to recognize this trend – Microsoft has been reported to be researching how its products (Xbox, Windows Phone 7) could be used in healthcare. Project Natal is one of their efforts to use the Xbox in physical therapy via a system that recognizes whole body movements. Scientific papers have even been published on the use of the Wii in neurological testing, specifically balance testing. So why not the iPhone? The First Lady certainly sees potential here and so do we. We’ve talked previously about how the iPhone has been used to manage autism and major depression as well as in smoking cessation.

All in all, this project is great idea because its taking the effort to a forum that kids are actively engaging in. And I trust that the ingenuity of the developer community, which has done wonders for medicine, will do something amazing here too. I recognize that this won’t solve or even dent the problem childhood obesity. But what it could do is actually send a message that successfully reaches kids. But here’s the key – no matter how good the app is, the entire message hinges on having parents and kids download it and use it.

This problem is where I really hope the ingenuity of developers jumps to a whole new level. Integration with social networks like Facebook that allow participants to form teams that support eachother in reaching exercise goals? Incorporation of contests and prizes into an exercise app that rewards key accomplishments? Or how about messages of support from popular figures like Miley Cyrus, Nick Canon, or that guy from Twilight? [On a complete aside, I’ve never felt older than I do right now] Obesity is a problem centered on maladaptive behavior patterns that become engrained in our brains and the tough part is breaking those behaviors, their reinforcement cycles, and redefining what gives us that rush of a good meal. A crisp salad with juicy, fresh fruits has to be better than the deep-fried Oreos covered in chocolate wrapped in bacon and then deep fried again.

For that reason, I think the best apps will be the ones that are not only the coolest to play with when the judges give them a go, but the ones that build in a platform for active longitudinal support. That’s just my humble opinion and frankly, having seen what iPhone developers have done so far, I expect to surprised by whatever comes out of this whole process in the end.