This is part of iMedicalApps coverage of the HIMSS 2010 Conference in Atlanta, Georgia

One of the numerous sessions today was a lunch hour “town hall” on the current status of CCHIT certification. This is one of many acronyms populating the language of health IT folks, especially recently, and stands for Certification Commission for Health Information Technology. This organization is a nonprofit, 501(c)3 organization with “the public mission of accelerating the adoption of health IT”.

This commission wields immense power over the future of health information systems by deciding what features of EMR are vital and the standards for interoperability between health IT systems.  They will have a leading voice in what the CMS (Centers for Medicare & Medicaid Services) will deem to represent “meaningful use” and thus qualify physicians and hospitals for a piece of the large pot of stimulus money that is being dangled in front of providers to stimulate EHR adoption.

While the CCHIT has been certifying EHRs since 2006, this last year has brought an intense interest in the organizations workings since currently it’s the only entity recognized by the federal government in certifying EHRs – further solidifying its crucial role in certifying meaningful use.

This “meaningful use” definition takes on a different meaning when looking at the monetary amount at stake.  The February 2009 American Recovery and Reinvestment Act (ARRA) allocated at least $20 billion in incentive payments to hospitals and doctors if they achieve “adoption and meaningful use of certified EHR technology”. Hospitals are maximally eligible for up to $5 million in incentives while physicians are eligible for up to $44k. As Dr. Leavitt explained, adoption will be the easy part, documenting meaningful use will be far more challenging.

This is because the breadth of criteria used to denote full and meaningful use is quite broad (see below) and also includes usability and patient access to digital records. Furthermore, while the “interim final rule” on meaningful use is available, the final rule will probably not be released until the second half of 2010, a fact that led to a lot of audience questions aimed at getting Dr. Leavitt to say what the final rules will be, to which he kept answering he doesn’t know yet. In fact, HHS has not even specified what organizations will be authorized to be accrediting bodies, although CCHIT feels confident they will be among those qualified.

As an example of the breadth of specifications for meaningful use, here are some of the 25 proposed criteria for just Stage 1 of meaningful use:

We do know there will be two formats for accreditation, either a single, comprehensive audit or a “modular” option where individual components of meaningful use are accredited. It was also mentioned that CMS has received a tremendous amount of feedback saying the timeline for adoption is too aggressive.

The incentives start with Stage 1 adoption in 2011 and anticipate completion of Stage 3 adoption within 5 years. After this, the incentives dwindle to zero and start becoming penalties.  Some believe the timeline will be revised, like the HIPAA deadline of 2002, that was extended to 2005. Dr. Leavitt cautioned, however, that it would be a poor gamble to put off beginning adoption any later than 2011. 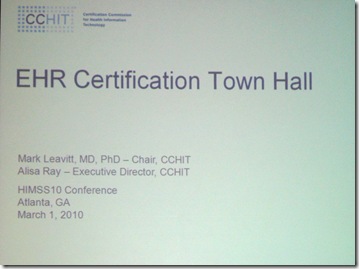