One of the newer electronic health records (EHRs) on display at the recent HIMSS conference was by CareCloud. The name “CareCloud” reflects that the application lives in the “cloud” and not on your computer. There is no software to download, and patient records can be accessed from any computer using a web browser.

This web-based application delivery is similar to other EHRs on the market such as the popular & free Practice Fusion, MDLand, Hello Health, and Allscripts (which has both a hosted and client-server option). What differentiates CareCloud is that it is built with some of the same tools and features as consumer websites and that it places high value on graphic design. In particular, it is built with Ruby on Rails – a modern, highly-abstracted programming language well suited for rapid development of web applications – and uses open-source software for infrastructure components, where possible. These strategies allowed the company to build the entire application within 18 months and to continue to add features quickly. The user interface is written using Adobe Flex which outputs to Adobe Flash and allows for a very attractive, fluid interface and, as you can see in the accompanying video, leaves little to be desired in responsiveness when compared to a traditional desktop application. 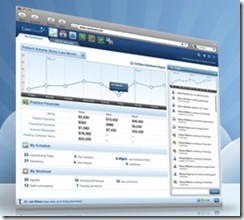 By carefully engineering the application to keep the user interface separate from the data, the CEO Albert Santalo, told us they are able to easily deliver the same application on multiple platforms, including the iPhone and the soon to be available iPad. In fact, we were advised to stay tuned in this respect given Adobe’s recent announcement of a a Flash to iPhone OS compiler which will allow applications developed for Flash to run natively on the iPhone OS. Having seen the CareCloud application running in a desk-top browser, I can imagine it being quite compelling running in a tablet.

While the EHR has the usual scheduling and practice management features, one can see throughout the little flourishes of application developers that have one foot in the consumer web space, where usability and integration with other web services are the norm and indeed necessary if a tech startup is going to survive. For example, while confirming a patient appointment, the office front desk can automatically send a Google map of the doctor’s office to the patient’s cell phone. However, the most interesting feature I saw was the built-in communication platform which incorporates a Twitter-like event-stream along with private in-office messaging. The feature is called the “Pulse” and appears as a customizable event stream which shows all the background activity that occurs inside the EHR, such as a patient being scheduled or a patient being taken to an exam room. This means, at a glance, a physician can see what is going on inside her practice, in real time, without having to repeatedly ask the front desk. Also included is a means to send message to other members of the office as well as securely communicating with patients. The patient documentation modules should be live by Q3 of this year.

Also interesting to the physician is that CareCloud’s roots are in “revenue cycle management”, i.e. billing and collection. Mr. Santalo’s last startup was a successful revenue cycle company, also based in Florida, which had grown to 250 employees. This extensive experience has benefited the development of CareCloud which has built-in automated charge submission and detailed collection reporting. Mr. Santalo claims that up to 90% of electronically submitted office charges are paid without complication. Behind the application is a team of collection specialists which will pursue any “stuck” claims on behalf of the physician.

There are two payment options, a flat monthly subscription fee of $350 or payment of a percentage of collections, analogous to a billing company. Thus far, CareCloud has already attracted $2.3m in funding and recently won an invitation to present at the Health IT Venture Fair at this year’s HIMSS, an event to highlight promising growth companies to potential investors.  The product is launching next month with several physician practices already subscribed. For those observers who have noticed that the rapid evolution and attention to usability of the consumer web had yet to make large inroads into health information systems, Care Cloud is a company to keep an eye on.