For anyone interested in global health, there are a cadre of organizations that typically spring to mind as leaders – the CDC, USAID, and the Gates Foundation for example. I had the opportunity while at HIMSS to chat with folks from another organization that put boots on the ground immediately after the Haiti earthquake, is running programs worldwide on a number of endemic diseases (HIV/AIDs, malaria, lymphatic filiarisis), and operates a high-tech lab in Atlanta to develop field tools for public health workers. This is all from what I knew as a major defense contractor. But you’d never guess the that if you talk to Amy King (VP, Health IT) and Tom Verbeck (CTO, Health IT) of Northrop Grunman. Northrop entered the public health sphere just over a decade ago, looking to parlay the expertise it had developed via defense work – such as IT capabilities from intelligence projects – into a new health IT division. Since then, it has grown to employ over 200 epidemiologists along with scores of engineers, developers, clinicians, and other professionals, all of whom apply their range of talents to world’s biggest global health problems.

You may be wondering where the “mobile health” part comes in. For that, lets talk about a specific project that Northrop worked on to track HIV/AIDs in the Dominican Republic – a great anecdote of how mobile technology, on easy to use mobile devices, plus a strong IT support infrastructure can make a big difference and even turn every iPhone owner in the world into a public health field worker. 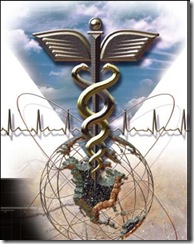 I spoke with one of Northrop’s engineers, who had been working on a project to track HIV/AIDs in this South American nnation. The video above is of a pretty simple app – pictured here on a heavy-duty PDA but functional on really any mobile device – that tracks HIV testing results. The public health worker shows up at a clinic outpost and tests everyone there with a rapid HIV test. On the app, they enter the name, some demographics, and the test result. As this process repeats itself all over the nation, this data coupled with GPS information, are synced to a national database built and analyzed by Northrop to identify and analyze epidemic trends. A natural extension of this kind of functionality would also to track HAART compliance, another critical factor in managing the HIV/AIDs epidemic. But while this project was fascinating, his vision for future applications was even more exciting. Imagine an emerging outbreak in the United States of some disease, such as influenza. Northrop releases an app for the iPhone, Android, Windows 7, Symbian, and all the other major mobile device platforms. This app is pretty simple – it asks for a name and includes a validated symptom questionnaire – and records GPS data for every entry. Overnight, everyone with an iPhone has been turned into a public health field worker – the disease can be tracked by millions of people, with the resulting mass of data used to much more accurately monitor disease trends. Updates could then be relayed back to via the app, such as public health notices (such as vaccine availability). Or similarly, take a disaster zone where a flood of relief workers has entered the field – each worker, whether a nurse or the guy driving that laundry truck, could download an app to track say diarrheal diseases. All of this would utilize more or less the same technology and back-end IT infrastructure that Northrop has put into place all over the world.

The possibilities are pretty exciting – Ms. King and Mr. Verbeck are clearly very enthusiastic about the work their team is doing. As Ms. King commented, the opportunities for Northrop to bring over their experience and knowledge from the military and intelligence worlds to public health have allowed them to unleash “the passion of people trying to make a difference.” While that may sound cheesy, I definitely believed her. According to Ms. King, the Northrop team is heavily embedded with many of the major public health players I mentioned above. They are, according to her, “everywhere the CDC is” and work with the CDC, Gates Foundations, and USAID (among others) to connect the dots on often parallel, independent efforts to address the same problem. Mr. Verbeck noted that Northrop employees deployed to Mexico City at the outbreak of the H1N1 epidemic, helping manage and analyze the data collected by the CDC workers. Another area he noted that Northrop is active in is health IT security. As the nation moves to a electronic health records operating, at least on some level, nationally, data security will be important and Northrop’s intelligence work clearly positions them well to engage in this arena.

To be honest, my conversation with Ms. King (who coincidentally was noted as a “Health IT Game Changer to Watch by ExecutiveBiz), Mr. Verbeck, and their engineers encompassed far more than I can fit into a single post. Some of their work, especially the stuff I described above, is a fantastic example of how mobile medical technology – even just simple apps for the iPhone and other consumer devices – can be transformational in healthcare. I’m definitely excited to see where the folks at this “stealth healthcare company”, as Ms. King described it, take public health next.