Need to Go to the Emergency Room? Let your iPhone Medical App Help Figure Out Which One 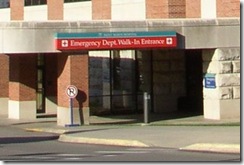 Emergency rooms are notorious for their long waiting times – that’s pretty common knowledge. But now the Hospitals of Central Connecticut are looking to a new medical app for the iPhone to help improve their emergency room wait times. Having spent a fair amount of time recently working in an emergency room, I (and probably everyone with similar experiences) can assure you that no one – physicians, nurses, administrators – want it to be that way. Much effort has been made in improving patient triage, workflow management, and other areas of opportunity that could increase the efficiency with which a patient is managed when they get to the emergency room. Some emergency rooms, like Hospital of Central Connecticut, are now looking to improve efficiency even before the patient arrives at the emergency room. The New Britain Herald reports that a new medical app released for the iPhone this week allows patients to view waiting times for the emergency rooms at two local hospitals in the hopes that patients with non-emergent complaints will head to the less crowded ER.

The premise here is pretty simple. There are two campuses of the Hospitals of Central Connecticut in roughly the same area – New Britain and Southington – and only fifteen minutes apart. The vast majority of patients who come to emergency room don’t really have emergencies, at least not the kind where that time makes much of a difference. So a patient in, say, the North End area with a deep laceration on their hand who needs stitches may check his or her iPhone and see that Southington Hospital has a five hour wait while New Britain only has a two hour wait. This patient, with a non-emergent problem, is now headed to the hospital that is in a better position to treat him or her – a win-win for the patient and the hospital.

There are obvious dangers however with this kind of app. The most obvious is that patients with dangerous symptoms will end of wasting valuable time because they try to go to the hospital with the shorter waiting time. Imagine a stroke patient who may only present with left arm weakness. The symptoms have been there for about an hour and a half and he opts to go to the hospital thirty minutes away rather than the one five minutes away based on wait times. Brain-saving reperfusion therapy has to be given within three hours of symptoms onset, at least per current protocols – time is literally brain for this patient. Similar scenarios aren’t hard to imagine for patients with chest pain, a transient loss of consciousness after a traumatic injury, and other situations where time is critical to outcomes.

Hospital officials naturally emphasize that patients should err on the side of caution and call 911 for anything close to an emergency. Its just that some patients may have a tough time figuring out what that is. However, there are obvious benefits to clear cut situations where therapy is needed soon but not right now, and they tend to be injuries – a broken arm, a cut, and so on. Features like an introductory screen detailing situations where it is appropriate to use this app or danger signs that warrant immediately calling 911 may help mitigate some of the potential dangers. Used very judiciously, these kinds of apps can help improve regional management of emergency medical facilities.