Should Medical Professionals Get an iPhone or an iPod Touch? 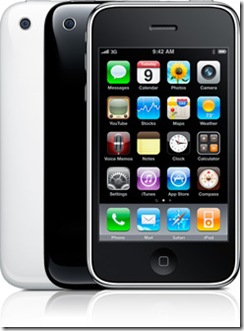 So you’re a practicing provider or you’re in medical school.  You’ve seen some interesting medical applications out there and you’re wondering if you should get an iPhone or an iPod Touch.  This is a scenario that is often e-mailed to our site from providers and students.  In order to answer this question, I’ll first talk about the differences between the two devices and how the user experience will vary from a medical standpoint.

The iPod Touch runs the same operating system as the iPhone, called the iPhone Operating System.  However, the iPod touch has key hardware limitations that differentiate it from the iPhone.

The major difference between the two is obvious.  The iPod Touch doesn’t have any cellular capabilities.  So in order to use the internet, you must be connected to WiFi (wireless internet).  This is key to note because there are certain applications that require you to have an internet connection.  Two that come to mind are the Blausen Human Atlas and the Clinical Orthopedic Exam Apps.  These apps can function without a dedicated internet connection, but you aren’t able to use them to their full potential.  Both apps require you to stream videos that are not built into the applications.

If you hospital has a dedicated WiFi connection and your iPod Touch can connect to this WiFi connection easily, then this difference will not affect you.  But if your hospital does not have a dedicated WiFi connection, or if it’s difficult for you to connect to the internet, than the iPhone would be a better option if you want to use applications such as these to their maximum potential.  Remember though, if you aren’t getting reception in the hospital, often the case with AT&T, than your iPhone won’t be able to connect to the internet unless you turn the WiFi on.

My suggestion would be to contact your hospital’s IT department to see if they can connect your iPhone or iPod Touch to the wireless internet.  In order to use the WiFi in my hospital you have to go through a login screen, which can be extremely painful and annoying.  Luckily, the IT department is great and they were able to change the wireless setting on my iPhone so I didn’t have to go through the normal login screen anymore and and now my iPhone is always connected to WiFi.

To be honest, for medical professionals, this is the main key difference between the two devices.  The medical apps we’ve run across don’t really utilize the added functionality of the iPhone, such as Push-notification, GPS, and the camera.  Medical Apps such as Epocrates, Merck Manual Professional, and other reference apps don’t require this added functionality and will run just fine on your iPod Touch.

If you’re always in the hospital, and are easily able to connect to WiFi, then I’d recommend you stick to the iPod Touch and save yourself from having to pay the extra monthly data fee that comes with the iPhone.  Plus, if you’re a resident you’re working 24/7 anyways and you probably won’t even that that much of a chance to use the extra functionality.

If you’re a medical student, all the study applications we’ve reviewed, such as the USMLE question banks and anatomy apps, will work just fine on an iPod Touch.

There are also some minor differences, such as the lack of an extra “zoom” feature that the iPhone has.  I highlighted this in the iRadiology review.  This feature can be useful when looking at detailed radiology, however, it’s not that big of a deal.

Now if you want to get the iPhone because you want a dedicated smart phone, than by all means, it’s a great device.  I went with the iPhone because I need to always be connected to the internet so I can respond to e-mails.  I use the push-button notification,push-email, and GPS functionality constantly, but I’m fully aware that many healthcare professionals don’t.

In our reviews, if a medical app has limitations on the iPod Touch, we almost always comment on it.  If you still aren’t sure though, feel free to comment on this post or a particular review before you buy a medical app and your question will get answered.