The challenge of identifying and absorbing relevant medical literature will not abate anytime soon and the proliferation of services that purport to simplify or eliminate this problem for physicians is itself now becoming a distraction. The rapid adoption of web-enabled smart phones by physicians, such as the iPhone, is driving this dilemma from the theoretical realm directly to the bedside. The hope is that if relevant medical literature is immediately available at the point of care, physicians would be more inclined to use it.

At the same time, the mantra of practicing medicine that is evidence-based is ringing ever louder. Thus far, it seems to this reviewer that most physicians apply it most strenuously when criticizing other physicians’ decisions rather than applying it to their own practice. Nevertheless, large well-respected compilations like the Cochrane Abstracts are available and widely used.  They offer well constructed summaries of evidence-based diagnostic and treatment guidelines for thousands of pathologies.  It is into this nexus that the “Evidence Central” app enters.  This review will cover the features of this recently released medical application, which is technically “free” in the App Store, but requires a paid subscription of $79.95 in order to actually use.

Wiley-Blackwell, the venerable scientific publisher (“knowledge for generations” is their tagline) offers subscription web based access to the Cochrane database as well as other partially overlapping databases of clinical literature such as Evidence Based Medical Guidelines and Essential Evidence Plus. Unbound Medicine is a multi-platform mobile medical application developer. The two have partnered to port these databases into the Evidence Central App, available on the iPhone and Android devices.

Unbound Medicine has a long list of prominent electronic offerings including the Merck Manual (reviewed previously), the Oxford Handbook, and Harrison’s Manual.  The Evidence Central application is a mirror of a web portal to the three Wiley web databases mentioned above as well as partial web access to four well known journals, American Family Physician, Annals of Internal Medicine, JAMA and NEJM. 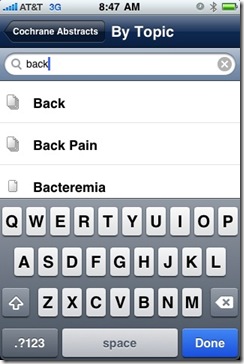 While the depth and breadth of information available through these databases is truly impressive, the application unfortunately also propagates the corresponding dilemma. Namely, it does not attempt to solve the problem of parallel entryways into the separate databases nor the multiplicity of similar sounding titles and topics.  It does not explain to the user how each database is different and, unlike the corresponding website, does not offer a global search across the databases. 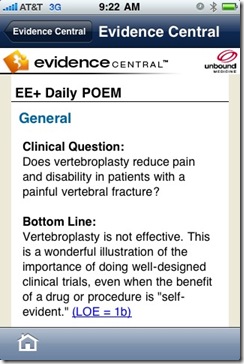 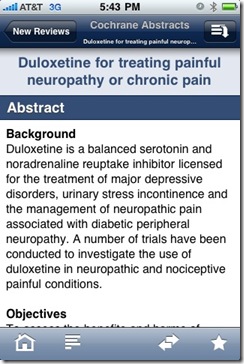 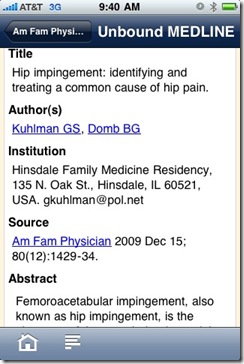 What I would like to see in future versions: 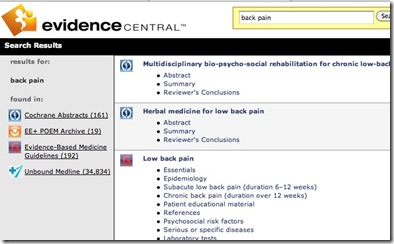 The dilemma of the practicing physician basing complex decisions on incomplete information will undoubtedly remain inseparable in the future from the practice of medicine. However, closing the gap between available evidence based literature and the clinical question at hand is at least partially addressable with improving technology. In this case, Unbound Medicine’s “Evidence Central” assembles a highly potent collection of clinical evidence aimed directly at the practicing physician. Access to the Cochrane Abstracts alone might well justify the price of subscription.

However, what we are also seeing thus far with the first wave of clinically based applications is that more targeted products, e.g. Procedures Consult: Musculoskeletal, are more finely tuned to access via a hand held device.  This appears logical since it is significantly more difficult to synthesize thousands of pages of text and literature and have it instantly reborn on a mobile device, which is partially the huge task Evidence Central tries to accomplish.

In the future, it is inevitable that medical authors and publishers will start to primarily design for smaller form factors and this task will not be left solely to software developers. When this occurs, we should see a better translation of medical literature to mobile applications. Until then, we can certainly enjoy the wealth of knowledge that rich applications such as “Evidence Central” allow us to carry in our pockets.

-Dr. Wodajo is a senior writer for iMedical Apps and we feel privileged to have him on board.  He brings an extensive clinical background to the medical app reviews. His blog can be found at http://www.orthoonc.com.