The Google behemoth has brought us many life-simplifying applications in the last decade (gMail, Google Calendar, etc…). Health professional have found these applications priceless in many aspects of our busy lives. Whether keeping that Grand Rounds top on the agenda or making your kids recital, having access to the data of our lives wherever we have internet is something we cherish. In December 2008 Google released another web based app to organize our lives, Google Tasks.

Google Tasks functions as a simple to-do list, with the ability to create multiple lists, provide due dates (and sort by due dates), add notes and access these lists through gMail, Google Calendar or on a standalone web app. This enables individuals with busy lives, i.e. medical professionals, to keep tabs on what’s most important, when it’s important and if we’ve yet done it. Unfortunately, like many Google applications, Google Tasks is solely web-based requiring the use of a browser and internet connection to access your tasks (both on a PC and Mobile Device). This issue has been remedied in the past for gMail and Google Calendar by the native Apple applications “Calendar” and “Mail” which sync with Google but retain information for offline viewing. Apple has no such native app for tasks. In comes GeeTasks to solve this issue.

There already exists a plethora of to-do lists in the App Store. Many offer syncing with online subscription services (some free, some pricey), but none sync with Google Tasks straight from your iPhone/iTouch. Most applications cite Google’s withholding of the Google Tasks API (Application Programming Interface; what allows programs to interact with other programs) as the reason syncing isn’t yet provided. Developer Memengo, Inc decided this wasn’t an insurmountable obstacle and went ahead and figured out the API protocols on their own. This has been done only by one other developer, who currently has the Google Tasks app out for the Android OS. The biggest issue with the app rests in the fact that the API has not been officially released. If Google makes any changes to the API, GeeTasks won’t be able to sync and Memengo, Inc will be forced to rewrite the protocols to restore it, a process that could take up to 3 weeks. In the meantime, GeeTasks would still function as a capable, native “to-do” app. 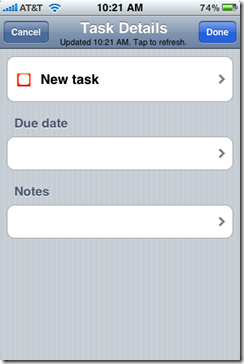 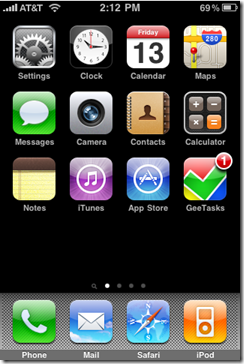 GeeTasks ends up providing the user with a simple native “to-do” application for their device, with the functionality of the Google Tasks application and the unique ability to sync directly with Google Tasks. This provides the busy Health Provider or Medical Student with a handy place to organize their day, week, month etc. with those tasks best suited to a “to-do” list rather than a calendar. The ability to check things off as they’re finished is also quite satisfying, and may even increase the likelihood you’ll get those tasks done (RCT pending). GeeTasks could also be recommended to patients who need additional help with task planning and reminders (patients with ADHD, dementias, etc.). Unlike the USPSTF, we here at imedicalapps.com are allowed to consider cost-effectiveness, and at $2.99, GeeTasks is cheaper than any notepad I could find at Staples (pen not included).

The features of this application are basically those offered by Google Tasks. These include:

Additional features include the ability to sync to Google and still run natively when sync isn’t available (with new tasks syncing when you are back online), color coding to keep you informed of a tasks sync status (red check or check box means it has not yet been synced) and reminders on the GeeTasks icon of your home screen (the little red number in the top-right corner of the app icon). In the native Apple “Settings” app you can adjust the GeeTasks reminder number to display any of the following:

As tasks are completed, they are grayed out and the reminders for those tasks disappear. You can also set GeeTasks to sync either Immediately, Immediately (with no warning when you’re offline) or Manually.

GeeTasks took into account privacy quite adequately. After initially entering your Google ID and password, it is stored in the iPhone’s/iTouch’s secure keychain (the same way that the iPhone/iTouch saves your gMail password for mail). After this initial step, you never have to enter your login information again, and the only people who see your password are your iPhone/iTouch and Google (as it’s transferred for login purposes). 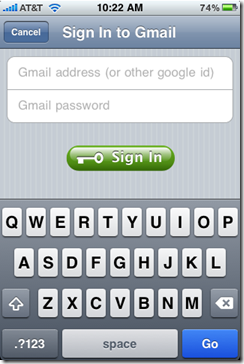 The application needs to be opened in order to sync tasks. It would be nice to have scheduled updates done without user involvement (the way mail and calendar work), but the developer informs me this isn’t possible.

The app doesn’t yet support indenting tasks to visually group them (as the web app on the PC does). The developer has planned to use the ‘swipe’ gesture in the future to enable this indenting functionality.

Recurring tasks are not supported by the Google web app yet, and are therefore not yet available on the GeeTasks native application. Additionally, while supporting “due date” Google doesn’t support “due time.” It would be nice to see this added to the native application, even if it’s not data that can be synced to Google.

Currently, you also cannot create new task lists on the application. This function is available on the Google iPhone/iTouch web app, so I would expect to see it added to GeeTasks soon.

You can’t manually sort the tasks in your list, but I’ve been informed that this is already being addressed and will appear in a future update.

What I would like to see in future versions:

GeeTasks fits a unique niche of providing a native “to-do” application on the iPhone/iTouch that syncs to Google tasks. This allows those of us with Google accounts (I assume very few of you haven’t used gMail or Google Calendar) to keep using Google for mail, calendar and now tasks while offline, without opening Safari or needing to enter our login information repeatedly. There are plenty of more complex “to-do” apps out there for those that don’t use Google and have more complex functionality (the developer suggested Remember-the-Milk), but most of us don’t require that level of functionality nor do we want to create yet another user account or pay a subscription fee. For those who already have a Google account and want a simple “to-do” list, GeeTasks provides this for less than the price of a pad of paper at Staples. So keep it in mind for yourself or your patients, and keep checking the App Store for future updates.

Note: If you use Google custom domains (“Google Apps” for business users) keep in mind that you’ll need to buy the slightly more expensive ($5.99) GeeTasksPro. This probably applies to very few of you.

Along with traditional Medical Applications, we will be looking at “Productivity Applications” that are useful to medical professionals.  This is the first part in that series of reviews.

Matthew DeAugustinis is a currently a 4th year MD/MPH student with an interest in medical technology, among other things.  He currently plans on going into emergency medicine for residency.  He is currently one of the guest writers for iMedicalApps.com