One problem that has plagued physicians in specialties where imaging is important is how to describe a patient’s imaging findings to a colleague. Certainly, the radiologist’s report is helpful but sometimes it’s not enough. Particularly for surgeons and interventional radiologists, imaging findings are like a road map to a procedure. If you’ve ever given driving directions to an out of towner, you’ve seen the look of confusion overcoming their face as you desperately pile on landmarks hoping they don’t get lost. But, if you are a physician, how do you communicate the subtleties of abnormal anatomy without pictures?  This review will discuss how this application helps put a legitimate image viewer in the palm of your hand via the iPhone Operating System.

The Osirix iPhone app can actually help. This well-written application brings a small and easy to use DICOM viewer to the iPhone. DICOM is the standard file format used for almost all forms of radiology imaging, including CT, MRI and nuclear medicine.The Osirix iPhone app ($19.99) is a good companion to the OsiriX desktop application (http://www.osirix-viewer.com/). For those not familiar with this remarkable piece of software, it’s a free & open-source DICOM viewer developed specifically for Mac OS X by a group of radiologists. The desktop application is now over 5 years old and is a mature, feature filled imaging workstation. It’s a rope of rescue from the minimalist and poorly designed viewers included on imaging CD ROMs brought in by the majority of patients these days.

The Osirix iPhone app can download images from the OsiriX desktop application over a wireless network. If you have access to your institution’s PACS server, it can even interface directly to the PACS using the DICOM Query & Retrieve (“Q&R”) protocol. Once the images are on the iPhone, you can scroll through them, change the windowing (soft tissue, bone, lung, etc.), make measurements, and even quantify Hounsefield (radiodensity) units! 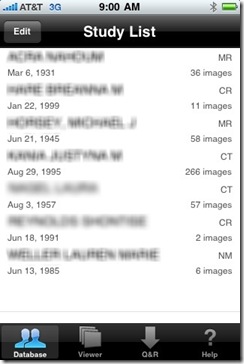 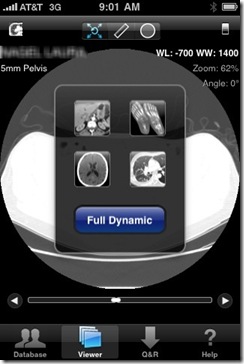 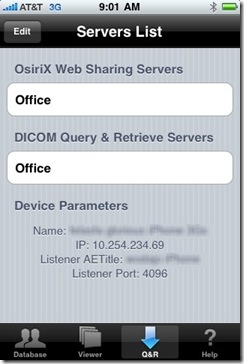 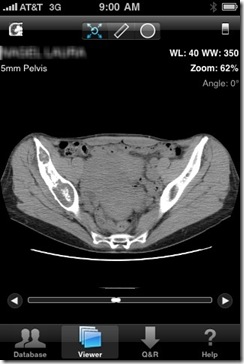 The OsiriX iphone app is a very useful medical application that shows the flexibility and power of the iPhone platform. The app was even highlighted in one of Apple’s television commercials. More importantly though, when speaking to another physician, we can actually look at patient’s images now, instead of drawing lines and circles on the nearest piece of paper.

Dr. Wodajo is our newest contributor to the iMedical Apps team and we feel privileged to have him on board. He provides a surgeons perspective, along with an extensive clinical background.